I'm a Scientist: Supported by Wellcome and UKRI
Skip to content

About I’m a Scientist

I’m a Scientist is like school science lessons meet the X Factor! School students choose which scientist gets a prize of £500 to communicate their work.

Scientists and students talk on this website. They both break down barriers, have fun and learn. But only the students get to vote.

This is the Reproduction Zone. It has a range of scientists studying all different topics. Who gets the prize? YOU decide!

The largest cell in the human body is the female egg and the smallest is the male sperm – every human spent about half an hour as a single cell when the egg and sperm first combined. Then nine months later we’re made up of 100 trillion cells – amazing! 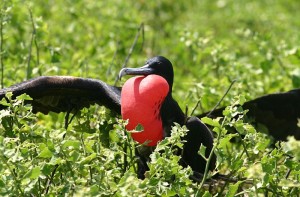 Is this display impressive enough to lead to some reproduction? Image by Charlesjsharp for Wikimedia

When bees mate the male’s genitals explode and snap off inside the female to stop other males from getting in on the action – this method is so effective that male wasp spiders use it too. Frigate birds use a different tactic, covering their mate’s eyes with their wings to stop them noticing other birds. And the females would definitely spot the competition as male frigate birds inflate a big red heart-shaped throat sac in order to attract females.

But it’s not just animals with interesting ways of mating and reproducing, microbes and plants also have to ensure their genes are passed on to the next generation. Bacteria replicate themselves while plants rely on pollination.

Reproduction includes everything from the animal behaviour involved in mating to what goes on inside cells before, during and after fertilisation. It also includes everything right up to birth, and even growth and development, so there’s lots to find out!

Would I'm a Scientist be great at your school?

And make sure you support us on Twitter, so we can say hi, and keep you up dated on what's going on.